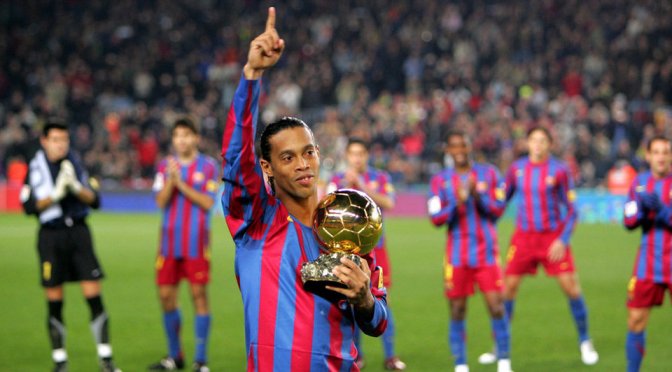 Media and soccer fans around the world have set their eyes on the city of Santiago de Queretaro, Mexico because a two-time «FIFA Player of the Year» has signed a two-year contract to play with Queretaro F.C. which is currently sitting in eighth place almost halfway through the season. Ronaldo de Assis Moreira, better known as «Ronaldinho»could be presented at the «Estadio La Corregidora» at any moment.

Ronaldinho comes to change many things about the poor conditions the mexican soccer league faces. The same league club owners pride themselves about managing are often facing payment problems. Just last season players from Ronaldinho’s new club were playing for free as the people who owned the team could not pay them. After the end of last season, «Grupo Imagen», one of the leading media businesses in Mexico bought the team and now they even have the money to add one of the world’s greatest soccer players to its roster.

A team that struggled to get 20,000 people to watch its games can now almost guarantee they will have sold out crowds awaiting every two weeks when they play at home. Not only that, the impact of Ronaldinho will also benefit other teams that host Queretaro for the reminder of the season and the next three that are stipulated in his contract. This is where the LIGA MX will be grateful the most. Experts predict that the superstar has enough power to sell-out every stadium he steps on no matter how bad the teams are doing even if the prices go up.

It is almost a given that «Dinho» is not at the same level he was when Paris Saint Germain and Barcelona had him, but his ability to amaze fans did not die while he was in Brazil. Since then he has been mostly know for being a wild party animal. That was a costly mistake for him as it is said to be the main reason Luiz Felipe Scolari did not call him to be part of the Brazil 2014 World Cup Team.

As weird as it may sound, what the mexican soccer league is doing with the brazilian is something the Major League Soccer has been doing for a long time. Long time ago Pele played in the MLS for the New York Cosmos, Hugo Sanchez with Dallas Burn, David Beckham with the L.A. Galaxy, Thierry Henry is currently playing with the New York Red Bulls while David Villa is about to come stateside to play with the new team called New York Football Club just to name a few.

Even though the economic impact at stadiums has not been as high as many people expected it has raised the level of a league that years ago was nowhere to be found on a soccer map. The league has made huge leaps by either exporting many players to europe or building a strong base for its national team now coached by Jurgen Klinsmann who can threat the most powerful teams either at home or even on the road.

The only «limit» mexican teams have when signing a new player is that they can only have five of them who do not have a mexican passport. Queretaro wanted the brazilian so badly they sold uruguayan Diego Guastavino on the last day the transfer window was open for LIGA MX teams. He has just signed with Boston River from his home country.

United States professional teams operate under a set budget established by the league. They are not free to spend all their money the way they please, which I believe keeps a certain level of competition between the teams in the league. The salary cap for the 2014 MLS Season is $3.1million USD but bringing in players like David Villa does not comply with this cap, as they are brought in like designated players who can get a more flexible salary.

With that being said, mexican players usually receive a better pay than north american soccer players which makes them (mexicans) less interested on playing abroad as they could be sacrificing their own salary.

There are no discipline restrictions for the seventh brazilian world cup champion to play in Mexico, and his actual contract is not that expensive ($1.95 million USD), far far away from the close to $100 million he was worth while playing for the catalan club where he experienced most of his glory. Whatever it is, his style of play will for sure break the monotony of the mexican soccer league like only the 34 year-old player can.

If nothing goes wrong, the new number 49 player of Queretaro F.C. will make his debut this friday (September 12) against Puebla in his new home or against Chivas next weekend.