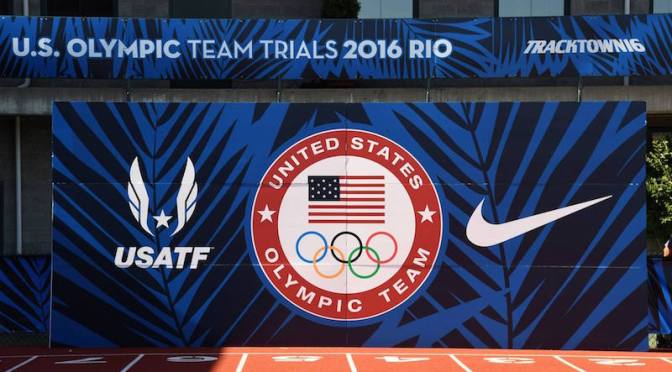 It all comes down to whatever happens at Hayward Field in Eugene, Oregon. The best track and field athletes in the United States look to punch one of the three tickets available in each discipline to the upcoming Olympic Games in Rio. Over 1,000 athletes have qualified, but only close to 100 will move on.

The track where Steve Prefontaine made a legacy is the same track that will be used by the best athletes in the U.S. to leave a mark in the sport of Track and Field. In every event from the 100 meter-dash to the 10,000 meter run and field events like the long jump and high jump dreams may be shattered, while others may have a chance to spread their wings.

SOME STARS GOING TO RIO

Galen Rupp had already qualified for the Olympics this past February in Los Angeles during the marathon trials. In his first shot at the mythical distance, Alberto Salazar’s athlete crushed the competition and won with a time of 2:11:12.  At the University of Oregon, where he studied, Rupp won the 10,000 meters for a seventh consecutive American Title with a time of 27:55.04

Then Justin Gatlin proved that he is made of steel. The 34-year-old sprinter recorded the fastest time ever run this year with an impressive 9.80. Gatlin, who missed the 2008 Olympic Games in Beijing is heading into his third shot at Olympic Gold. He is considered the biggest threat for Usain Bolt, who had to pull out of the Jamaican National Championships due to injury.

Allyson Felix (30) is another big star headed to Rio 2016. The L.A. native and already Olympic champion is headed back to the biggest sporting event in the world but for the first time in the 400 meters. She made the Olympic Team by winning the event with a time of 49.68. Later this week, Felix will look to clinch her spot in the 200-meter dash, and have a shot to defend her Olympic title.

Ashton Eaton is considered by many as the best athlete in the world and he keeps trying to prove that. The reigning Olympic World Champion in the decathlon had a «smooth» ride to the top of the rankings despite dealing with an injured leg. He is the world record holder and while he was far away from it over the weekend, he got the job done. Now his next job is to rest and defend his title in Rio.

SOME STARS NOT GOING TO RIO

Sanya-Richards Ross was hoping to get in despite a hamstring injury that bothered her in the last weeks of training. She won the 400 meters in London four years ago but her hopes to defend the title ended in the qualifying rounds of the trials. While she was planning to retire after Rio, she has decided to step aside now after 13 years as a pro. During her career, Richards-Ross won four gold medals.