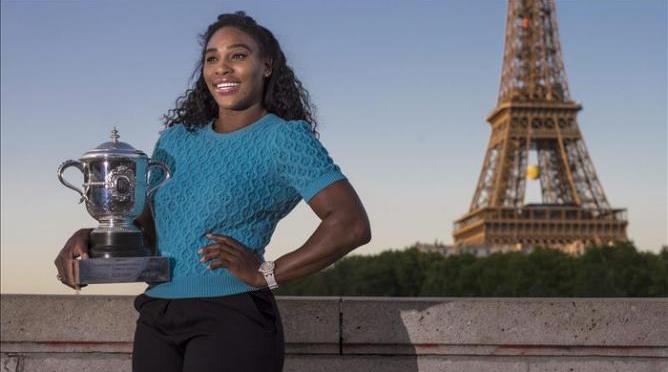 In the world of a sports reporter, this past weekend was almost as good as it gets. In less than 48 hours we had a new Champions League king, two Roland Garros champions, a Triple Crown winner, an exciting race of Formula 1, the start of the Women’s Wolrd Cup and the NBA Finals to top it all off.

Ever since 1978 that a jockey and his horse did not win the Triple Crown. The wait to see someone else accomplish that feat seemed to take on forever, but it was the Mexican Victor Espinoza who made history just outside of New York City by winning the Belmont Stakes. To win the Triple Crown, you must win the Kentucky Derby, the Preakness and the Belmont Stakes. Last year, Espinoza won the first two but failed to do so at Belmont. This year, despite a rough start, Espinoza lead his horse, American Pharoah to victory not just of the race but of the triple crown. We may have to wait another 37 years or more to see something similar happen again. To celebrate, he got to throw the first pitch of a MLB game at Yankee Stadium on Sunday.

Serena Williams proved that even while sick, she can still be considered the number one in the World. The American tennis player had to go the distance and beat Lucie Safarova in three sets, 6-3, 6-7, 6-2. The youngest of the Williams sister won her 20th major title and her second one of the year. She could become one of the few players to win all four Grand Slams within the same year. On the men´s side

On the men’s side Novak Djokovic was the clear favorite to win Roland Garros for the first time. He has won every other major tournament including the Australian Open this year. He won the first set on Sunday but after that, Stanislas Wawrinka assumed every risk possible to come out with the win. The Swiss man that has already won in Australia before, became what Rafael Nadal was to Federer for many years. The man that just would not let his swiss colleague win on clay. It took four sets for Wawrinka to claim the crown in France 4-6, 6-4, 6-3, 6-4.

Formula 1 made a stop on one of its fastest circuits, Gilles Villenueve in Montreal, Canada. The 4.361-kilometer track allows for a lot of overtaking and no one did it better than Sebastian Vettel. He started in last place and made up some ground quickly. It was impossible to think about him getting on the points, but he made it look easy. After 70 laps, the 4-time World Champion and new driver for Ferrari finished in fifth. Lewis Hamilton won the race from start to finish and his teammate Nico Rosberg came in a close second. Valterri Bottas wrapped up a great race day for Williams, a team that had many problems over the weekend and in Monaco as well. Seein Bottas back on the podium was a nice sight for the English team.

The National Basketball Association is wrapping up its 2015 season with Cleveland Cavaliers taking on the Golden State Warriors. The latter one had won the first game of the series that is decided by winning four games. Game 2 on Sunday was another thriller that proved just how good Lebron James can be and that there is no clear favorite in this series. With Kyrie Irving out for the rest of the series with an injury, all the weight of the Cavs hopes lie on the former Miami Heat star. He has averaged41.5 points, 12 rebounds, and 8.5 assists and that has the series tied at one win per team. Now they will travel to Cavs territory for game three and the odds are in nobody’s favor. Stephen Curry is the MVP and the leader of the Warriors.

It has been an interesting week and not for the right reasons in Track and Field. Alberto Salazar, one of the world’s best coaches is under investigation for a case in which he allegedly gave steroids and illegal substances to some of his athletes. Mo Farrah, who is one of them, was expected to participate in the Diamond League competition in Birmingham but the outside distractions got the best of him and he decided to withdraw. Bernard Lagat set a Masters Mile record of 3:41, just as Adam Gemili broke the 10-second barrier in the 100 meters, becoming the sixth British man to do so. A few days earlier in the Golden Gala in Rome, Ruth Veitia Vila became the oldest woman to clear two meters in the high jump.

The Chicago Blackhawks have made it a tradition lately to make it all the way to the last series of the tournament. After two games they are tied 1-1 with Tampa Bay Lightning. Game three could give us a good hint of who can take it all. 80% of the time, the team that wins Game 3 after the series is tied, ends up winning the other two games it needs. Something that may go against them, is the fact that it is Tampa who carries a stronger momentum into the third game of the finals after winning the second game by 4-3.

A new champion was to be crowned in Berlin after Real Madrid failed to reach the final. A lot of speculation surrounded soccer’s most important game at the club level. One team has been the most dominant club in the last decade, and the other was a big surprise to many despite its dominance in Italy. Lionel Messi was poised to become the first player to score in three UCL finals, but destiny had better plans for Neymar Jr. The Brazilian won his first Champions League title after scoring a brace  El Pistolero Luis Suarez scored the other goal in a 3-1 victory where Alvaro Morata temporarily tied the game. Xavi Hernandez now leaves the club with 25 titles and four Champions League titles. Barcelona became the first European team to win the treble twice. At 35, Andrea Pirlo might have played his last game for Juventus and probably his last match with an Italian team.

Last year, the summer belonged to the men’s World Cup in Brazil. This year, it belongs to those who will be in Canada for the 2015 FIFA Women’s World Cup. The tournament kicked-off in Edmonton with a game between Canada and China. The host nation was about to settle for a scoreless draw when a penalty in their favor gave them the chance to get their first three points of the competition. On Sunday, Germany (ranked #1) beat Ivory Coast by 10-0 and no player scored twice. Now, the United States will make their debut against Australia, aiming to reach the final and win the tournament for the first time in 16 years.