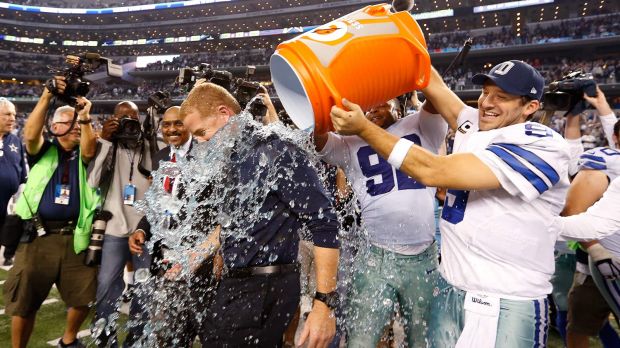 The accident waiting to happen has not happened this season for the Dallas Cowboys. Without Jerry Jones making the calls and letting his staff, lead by Jason Garrett do its job, after 16 weeks of football action this means the Cowboys are going to the playoffs for the first time since 2009.

Unlike the past three years, Dallas did not have to wait until the last game of the regular season to learn its faith. By winning all but three games up to this point last night at AT&T Stadium they clinched not just a ticket to the postseason but the NFC East division title.

America’s team has been unbeatable on the road but they have had their fair share of struggles when performing in front of a home crowd. They opened the season with a loss against the 49’ers and since then only the Arizona Cardinals, the Redskins and the Philadelphia Eagles have made it clear that they do wanted to mess with Texas.

That did not matter much now, since after losing to the Eagles in Thanksgiving, Romo has been on beast mode and done everything he can to take his team to where it stands today. After the Eagles lost to the Redskins on Saturday it was only a matter of a win against the Colts to seal the deal. They obviously came out on top with a dominant 42-7 performance over Indianapolis.

It was a record-setting night in Jerry World and it had nothing to do with ticket sales. The over 90,000 spectators were in to see the boys #finishthefight. Emitt Smith was sitting in the V.I.P. box with Cowboys owner Jerry Jones and «hoping» to see DeMarco Murray beat his record of rushing yards in a season. With having surgery done in his left hand just days before the game it was a surprise to see Murray on the field. At the end of the day he was 29 yards shy of it.

The one that did get a record was Tony Romo. The quarterback had just another one of those nights that are hard to believe from a QB that had been struggling with his games in December his whole career. He completed 90% of his passes (18-20), he did not throw a single interception while the Colts had two. He passed the ball for 218 yards which has him now as the franchise all-time leading passer with 32,971, putting him in the record books over legendary Troy Aikman.

At the end of the game there were many reasons to smile about in the locker room. The victory, the playoff spot, and being so close to getting their first shutout of the season and against a team that had scored in every regular season game since 1993.

It was also a special night for coach Jason Garrett who now has 40 victories with the team since he took charge in 2010. He is now showing why Jerry has kept him for a long time after losing decisive games against the Giants, Redskins and Eagles the past three seasons. For the man that once was a player and is now leading the organization to the spot in history it deserves, this is the reflection of the work done in all past three seasons and not only the past 15 games.

If the regular season ended today things would not look so nice for the Cowboys as they would most likely be playing the Cardinals  (11-4), one of the few teams that can brag about beating the boys this season. If the accident waiting to happen does not happen there is a big chance we could see the Dallas Cowboys back in the Super Bowl on February 1st at the University of Arizona